Using the word Genocide is a big deal.
Politicians and world leaders are careful to avoid saying it, preferring to use ‘ethnic cleansing’ instead. Why? Because it is a legally specific and a politically charged word that requires action by the U.N. Once you say ‘Genocide’, there’s no going back. It’s an accusation of human rights violations and once a country is accused of committing genocide, the rest of the world is responsible for ending it.
<
>
The United Nations first defined genocide in 1948 in The Genocide Convention. The treaty outlines that any of the acts commited with the intent to destroy, in whole or in part, a national, ethnical, racial, or religous group constitutes as genocide. Below are four acts of the five outlined in the treaty that Myanmar is guilty of  committing. 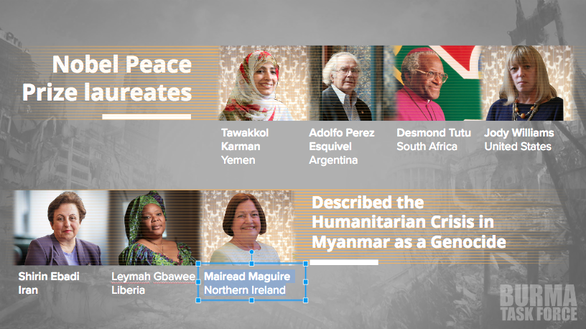 Seven Noble Laureates Acknowledge the Genocide in Burma
September 15, 2016
Video
Nobel Laureates Tawakkol Karman from Yemen, Adolfo Perez Esquivel from Argentina, Desmond Tutu from South Africa, Jody Williams from the United States, Shirin Ebadi from Iran, Leymah Gbawee from Liberia, and Mairead Maguire from Northern Ireland describe the situation of the Rohingya in Burma as a genocide.
Scholarly articles that acknowledge the situation in Burma as a Genocide:

The Slow-burning Genocide of Myanmar Rohingya
University of Washington | June 2014  |  by Maung Zarni and Alice Cowley
Over the past thirty-five years, the state in Myanmar has intentionally formulated, pursued and executed national and state-level plans aimed at destroying the Rohingya people in Myanmar. This destruction has been state-sponsored, legalized, and initiated by a frontal assault on the identity, culture, social...

Persecution of the Rohingya Muslims: Is Genocide Occurring in Myanmar's Rakhine State? A Legal Analysis
Allard K. Lowenstein International Human Rights Clinic at Yale Law School | October 29, 2015  |  by Alina Lindblom, Elizabeth Marsh, Tasnim Motala, and Katherine Munyan
This legal analysis considers whether the ongoing attacks on and persecution of the Rohingya Muslim population in Myanmar constitute genocide, as defined by the 1948 Convention on the Prevention and Punishment of the...

The Threat to Burma’s Minorities
Harvard Gazette | November 7, 2014  |  By Alvin Powell, Harvard Staff Writer
Burma's Rohingya people are being slowly squeezed from their homeland by decades-long government policies that critics say deny them citizenship, health care, work, and schooling, with such tactics punctuated by...

Burma's Million-Strong Rohingya Population Faces 'Final Stages of Genocide,' Says Report
Time Magazine | October 29, 2015  |  By Rishi Iyengar
Despite the U.S.-led rolling back of economic sanctions and internationally backed national elections taking place early next month, more than a million people in Burma are facing state-sponsored genocide, according to a new...

Myanmar's Democratic Transition: What does that mean for the Persecuted Rohingya?
Research Conference, the University of Oxford | May 11, 2016  |  Hosted by the South Asian Research Cluster, Wolfson College, Oxford University
Objectives: To bring together researchers and practitioners in international law, history, public health, sociology, politics, and economics as well as Rohingya human rights defenders...